Opinion Ateneo alumnus to anti-Duterte: You may hate him, but Duterte is your 911

Ateneo alumnus to anti-Duterte: You may hate him, but Duterte is your 911

by Nathan Singson on 10:58 PM in Opinion
Ateneo de Davao University graduate Elton Levin Domingo had a message to share to the critics of Philippine President Rodrigo Duterte. In his Facebook post, he sent a message the people should think about. 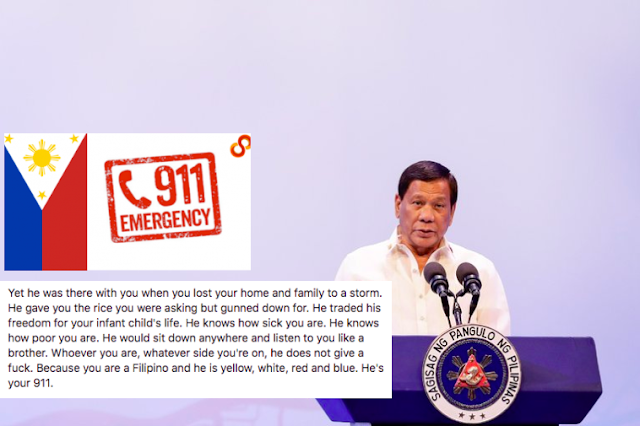 President Rodrigo Duterte / Photo credit to the owner
In his post, Domingo said that a lot of people hate the president because he is unrefined, unlike most presidents that the country has seen.
He said that people tend to hate the president because he “looks like sh*t”, he is a “s3x mani*c”, a “sinful thug” and many more.
But despite this, he says, Duterte has always been there for the Filipino people, may it be providing food for those who need it, or listening to his people’s problems.
Read his full post here:
“I get it.
You hate him because he has dealt with so much sh*t in his life that now, he looks like sh*t. He's the poor Bisaya image that makes the rich man cringe with utter disgust. He's the s3x mani*c to the conservative hypocrit*s and child m0lesters hiding behind barongs and religious robes. He's the sinful thug that will make you eat the fake plastic rice you smuggled, chew that cigarette you smoked in a prohibited area, and swallow that bala you planted in a sick old woman's baggage. You hate him because he is the biggest "F*CK YOU" this passive government has ever seen.
Yet he was there with you when you lost your home and family to a storm. He gave you the rice you were asking but gunned down for. He traded his freedom for your infant child's life. He knows how sick you are. He knows how poor you are. He would sit down anywhere and listen to you like a brother. Whoever you are, whatever side you're on, he does not give a f*ck. Because you are a Filipino and he is yellow, white, red and blue. He's your 911.”
***
Source: Elton Levin Domingo | Facebook
Share This:
Facebook Twitter Pinterest Linkedin Whatsapp Whatsapp
Opinion
By Nathan Singson at 10:58 PM