Netizen is scammed but BDO still insists on payment

by Jon Mapa on 12:47 PM in Social Media
Marvine Sy, a Facebook netizen, posted earlier this week about his experience with Banco de Oro (BDO), and a scam he recently suffered from. 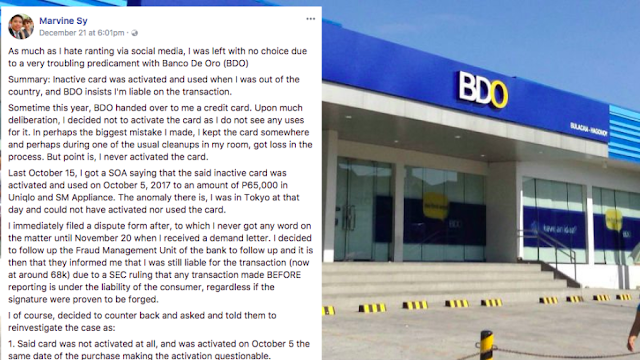 In his posts, he recounts the details of the incident.
According to him, his inactive BDO card was used by someone else to buy stuff costing to about 78 thousand by the end of the incident. The situation of which he immediately reported to BDO, however, the bank still charged him for the expenses because “any transaction made before reporting is under the liability of the consumer”.

It was a reasoning Sy had a hard time understanding because there was no way that Sy could have forseen his card being used.
He also went on to list down the reasons BDO used in order to assert that Sy should still pay the expenses. 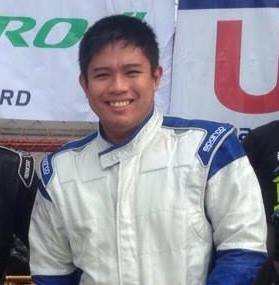 Marvine Sy / Photo from Facebook
By the end of the post, Sy says never to trust BDO again.
Read his blow-by-blow account here:
"As much as I hate ranting via social media, I was left with no choice due to a very troubling predicament with Banco De Oro (BDO)
Summary: Inactive card was activated and used when I was out of the country, and BDO insists I'm liable on the transaction.
Sometime this year, BDO handed over to me a credit card. Upon much deliberation, I decided not to activate the card as I do not see any uses for it. In perhaps the biggest mistake I made, I kept the card somewhere and perhaps during one of the usual cleanups in my room, got loss in the process. But point is, I never activated the card.

Last October 15, I got a SOA saying that the said inactive card was activated and used on October 5, 2017 to an amount of P65,000 in Uniqlo and SM Appliance. The anomaly there is, I was in Tokyo at that day and could not have activated nor used the card.
I immediately filed a dispute form after, to which I never got any word on the matter until November 20 when I received a demand letter. I decided to follow up the Fraud Management Unit of the bank to follow up and it is then that they informed me that I was still liable for the transaction (now at around 68k) due to a SEC ruling that any transaction made BEFORE reporting is under the liability of the consumer, regardless if the signature were proven to be forged.
I of course, decided to counter back and asked and told them to reinvestigate the case as:
1. Said card was not activated at all, and was activated on October 5 the same date of the purchase making the activation questionable. Furthermore, I was not in the country on said date and could not have done anything with the card.
2. There was no warnings via text that the card was about to be used in a big transaction
3. There is no way for me to report a fraudulent transaction before the it happens, as I clearly have no way in knowing what could possibly happen.

I demanded that they produce counter-evidence that it was indeed me that activated and used the card, such as receipts, calls, CCTV footages etc.
As perhaps expected in hindsight, they have not gotten back to me. During the middle of it all, I kept on following up to no avail, leaving me impatient as it feels like the bank has not been doing its investigation as I requested.
Until today, when I received a letter dating December 19, 2017, that they have investigated and therefore concluded that I am still liable for the transactions because:
1. Card used is an EMV Chip Card (I do not know what this have to do with anything)
2. Call retrieval revealed that caller was able to pass identification question for the card activation (I have no idea HOW they got my personal details, but as I mentioned, I was not in the country back then and despite submitting evidence of my trip, such evidence has clearly been thrown out of the gate)
3. No physical card presented as proof that card was not stolen (How can I present a card, when I did declare it was loss already during the initial investigation?)
Now they are asking me to pay a sum of P74,000 as interest payments has been factored in. This, despite overwhelming evidence of my absence in the country on October 5 which should have removed any doubts that there was fraud involved, and yet fell into deaf ears by this bank that supposedly Find Ways.

I am posting this to my feed as a warning to everyone, to never throw away unactivated credit cards. But most of all, to be careful on who you bank with.
BDO, a bank that I am dealing with for five years with three accounts under them and another active credit card that I use and have no history in delayed payments, has made it clear that they are not open to listen to the pleas of a customer who even was the one who approached them about the problem. If I have intentions to never pay, why did I even approach them to begin with? Is that not a token of goodwill from me?
AVOID BDO AT ALL COST. Their customer service is more than incompetent, it is lacking. Absent even. The convenience brought about by their accessibility will be thoroughly negated when the time comes you are in trouble."
***
Source: Marvine Sy | Facebook
Share This:
Facebook Twitter Pinterest Linkedin Whatsapp Whatsapp
Social Media
By Jon Mapa at 12:47 PM