by Nathan Singson on 12:43 PM in Entertainment, News
It was in Instagram that celebrity and It’s Showtime host, Anne Curtis posted about a soldier who was kind enough to shoot footages of the war that happened in Marawi. 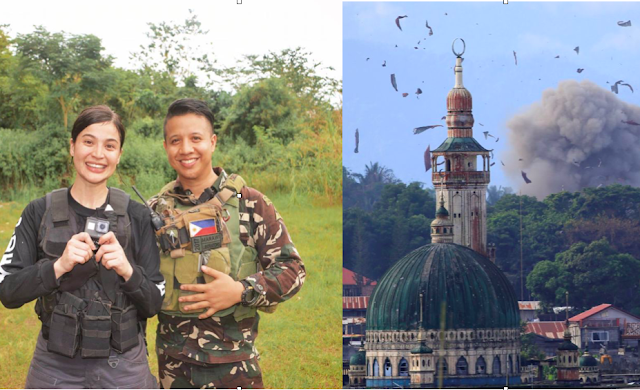 In the post, Curtis introduces 1Lt. Bala Tamayo of the Special Forces 134 Vishnu company who was kind enough to shoot video clips of the war happening in Marawi using a GoPro camera that Curtis herself sent him.

She shared that Tamayo is a talented amateur filmmaker and has shot clips for the Special Forces in the past.

Now that the war in Marawi is over, Tamayo personally returned the camera to Curtis for her to see and share the video to the public.

Curtis then proceeded to thank the soldier, along with his unit for all the service and sacrifice they have done for the country.

She calls on the public to watch the clips in order for them to see how the soldiers fight to defend the country.

👉 The gentleman beside me is 1Lt Bala Tamayo of the Special Forces 134 Vishnu company..

I met Bala when we were training and shooting with the Special Forces in Fort Magsaysay for BuyBust. He happened to offer oral rehydration salts during a very hot day in full battle gear and the rest is history. He became friends not only with myself but with everyone part of the BuyBust squad.

Shortly after, we learned that the troops were to go fight the war in Marawi. We somewhat kept in touch - which was great because we knew exactly what the soldiers needed during such a harsh time and sent over care packages to somehow boost their morale.

Along with my care package I sent over my @gopro to Bala - you see, he is actually a very good film maker and has done shorts for the Special Forces. His request to tell the story and experience the Marawi Siege from the boots of a soldier could not be left ungranted.

His words were - “i’ll return it if I survive this war. If I fall, my buddy will return it. That I promise “ I told him that I knew he would NOT fall and HE would personally return the GoPro once the war is over.. and IT IS OVER..

He returned it without even scratch..

So now, I would like to ask all of you to take time to watch the video of the actual war footage he shot with the GoPro I have in my hands in this photo. Watch how all the soldiers bravely fought for freedom and peace..

A salute to all the troops that fought hard, fell and survived fighting for peace in Marawi..

Thank you for your service and sacrifice.."

WATCH THE VIDEO BELOW: