Opinion Canadian criticizes ABS CBN: 'I have a hard time seeing any value in your news organization'

Canadian criticizes ABS CBN: 'I have a hard time seeing any value in your news organization'

by Nathan Singson on 3:53 PM in Opinion
The way ABS CBN covers reports on President Rodrigo Duterte has caught the attention of a Canadian political scientist who views their style of reporting as more of an "attack" against Duterte. 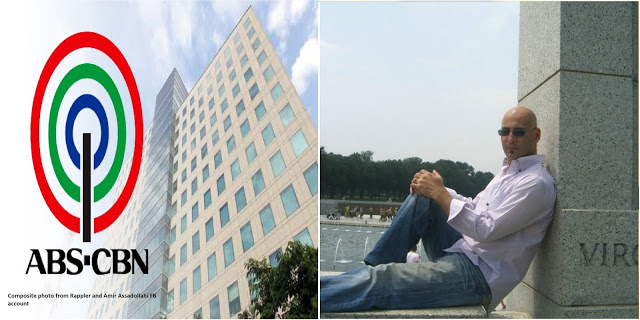 ABS-CBN logo and Amir Assadolahi / Photo credit to the owner

Amir Assadollahi said that even as an outside spectator he has seen the benefits that Duterte has brought in to the Philippines, however, the giant media outfit tends to slant Duterte's "literal" and "historical" terms.

Assadollahi also cited the incident in Turkey whose president's security guards drubbed protesters "on US soil" and he noted that US did not intervene in the events.


He put to light the "values of freedom and democracy" in the US that is now seemingly declining.

The political scientist also noted how erroneous figures of the anti-drug war are being circulated by Philippine media and he warned that this practice was also inherent in the Hitler propaganda.

"You talk about some strange numbers, and you keep repeating. You must have heard what Hitler said about repeating lies, right? "If you tell a big enough lie and tell it frequently enough, it will be believed," Assadollahi said.

He said to ABS CBN that they do not have to agree with Duterte's policies, however, they should be responsible of how they report his speeches. He even mocked the news organization that even when he is the foreigner he seems to understand better what Duterte is trying to relay.

"Aren't you getting tired of the same line of attack?!

It is getting really boring, and I have a hard time seeing any value in your news organization. Consider that as a constructive feedback and not as a criticism, because you don't take criticism very well at all.

Even I as a foriegn observer can see what your President is saying and I don't need to speak Tagalog or be a Filipino to understand what he is aiming to achieve. You got yourself a good president, someone who actually cares for your country and the Filipinos, and someone who is tirelessly hardworking. In my life time, I have not seen anyone as dedicated as him in bringing the Philippines back on the global map. His strategies are sound and well calculated, he does not do anything out of whim, and definitely he is an open book if you really want to read him. What he says is the honest truth, and yes, truth hurts and sometimes "honesty is a lonely thing" as John Lenon wrote, but that does not mean you should play with what he says or does and twist and turn things as you feel fit for you.

You obviously do not read history of the world at all. He talks in literal terms and in historical terms. All empires and all powers collapse and fall, and that is a historical fact, and you rather than understanding that simple fact that even a junior high school student should know by studying the world history, you take it and turn it into your own sick and twisted game for your own amusement.

Just a few days ago we all saw how the Turkish president's security guards beat up the protesters without provocation while on the U.S. soil and while their president was watching. Don't you think that is a failure of the U.S. democracy and values right there?! Don't you think that is the sign of weakening of the U.S. values of freedom and democracy that once the strength of those values made the U.S.A. great and an envy to the eyes of the world?!

You talk about some strange numbers, and you keep repeating. You must have heard what Hitler said about repeating lies, right?

"If you tell a big enough lie and tell it frequently enough, it will be believed."

Hitler did that, and you are doing the same thing as he did to convince everyone a "big lie."

Everyone knows that from the day your president was elected to lead your nation, your country became one of the most invested country in the region. He has fixed many problems the previous government had ignored or purposely created. He has brought the Philippines and the region one step closer to peace and prosperity. He has put the Philippines' national interests ahead of the foriegn nations' interests - something that your previous governments in the last 30 years have been willingly ignoring!

Every economist knows that the U.S. economic power is not as strong as it used to be, and every strategist knows that all the countries around the world need to shift their foriegn policies, but somehow your news organization cannot get it though its (your) thick heavy skulls filled with cement.

Your President has made your country be seen as a power player, and he recognizes the importance of the Philippines in the global market economy, and to do that he must reform the Philippines as fast as possible, but somehow you people (the thick headed journalists and corporate news organizations) can't get that though your head.

On a sarcastic note, let me know if you needed an interpreter to understand your president. I'll be gentle to explain things to you as if I was explaining it to a ten-year-old.

Don't be mad if you felt my commentary made you feel I was putting you down - certainly that was not my intention and you may have misinterpreted things again - I just wanted to give you a constructive feedback, one that you could understand in a language and tone of voice that you are familiar with.