by Nathan Singson on 1:21 PM in Opinion, Social Media
Feeling the pain of the parents who lost their children to left-leaning youth groups, a former member of the Communist Party of the Philippines-New People's Army (CPP-NPA) shared her tragic experience in the hands of the group, tagged as a terrorist organization, to a lawyer and radio-television host. 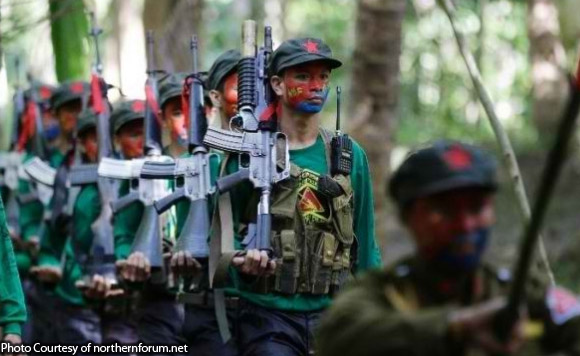 "May" (not her real name), 28, recounted her ordeal to lawyer Bruce Villafuerte Rivera, and requested that her story be told to the public "so she could at least save one daughter from being lost".

In a Facebook post, Rivera said: "She told me, her life is only for his son. If her story would save just one daughter from being lost, then it served the purpose".


Rivera said May approached her on Facebook through common friends after she saw last week's Senate hearing on missing minors, where mothers sought help from the government in getting back their children believed to be recruited by left-leaning youth groups.

May (not her real name), 28 years old recently surrendered to the military after 14 years in the CPP/NPA. The reason for her surrender: she wants a future for her 10 year old son.

It started so innocently. May was fourteen when she met Junior when she was a high school student in PUP (sa mga hindi gets. Not the real name of her school. Walang high school ang PUP. Hello.) She was an honor student and she was in a hurry to make her mark in this world. It was the GMA era and corruption charges have began to surface. There was a Valentine Day bombing in 2005 but it did not stop May from watching a movie. She met Junior (not his real name) in SM Centerpoint and the guy was interesting to her. He was 22 and as a 14 year old nerd, it was an exciting thought.

May ended up initially dating Junior after a month of text message exchanges. However, Junior was also busy as a member of a leftist partylist who won a seat in Congress in the 2004 election. He was assigned to youth membership. May wanted to be part of Junior's world so she also became a youth member of the group. May was one of the students who heavily protested against GMA when she made the "I am sorry!" statement. She was also becoming a regular protestor every time a journalist was killed and there were a lot that time more particularly, Marlene Esperat.

Slowly, May began to be serious in her advocacy and began doing so-called "immersion trips" to Leyte, Mindora and Mindanao. Coming from a broken family, her dad abandoned them and her mom found work as a nurse in KSA when May was 12 years old. As such, she was a good daughter and was given virtually little supervision by her aunt who became her guardian. Her aunt did not see anything wrong because she saw that May was doing things with a legitimate partylist and she made her trips when it was summer.

However, May did not finish her high school because she did not return to Manila when she took the immersion visit to Davao del Norte. She found out she was pregnant and Junior was the father. She found out that Junior is married so he convinced her to go underground and be rebels so she can be his cadre, partner and wife.

She gave birth to a baby boy in May 2009. Three months after, she was still in the rebel camps when she learned that Junior went abroad. In fact, Junior went to a European country to work there. In 2015, May would discover that Junior was never married and was married for the first time to an Austrian. May has become the "wife" of numerous NPA cadres but they would eventually leave, surrender or get killed.

So she found a way to surrender just last year. She learned her mother died of a drug overdose after May disappeared and her younger brother recently died in a drug-related violence. Her aunt refuses to talk to her because of the way she left them and her so-called "revolutionary friends" deny their connections and the party stood firm in their insistence that she was never a member.

She saw the hearing in the Senate and she reached out to me through a common friend to tell her story. Then, my Facebook was reported and telling her story would not be that much effective if told in this minor account. I anticipated to post this.

An hour ago, she private message me. She told me her life is only for his son. If her story would save just one daughter from being lost then it served the purpose. She saw the pain in the mothers who their children get lost in an ideology and taken from them because she is now a mother but this time, she has the power to decide for him. Something, her mom never got to do. And she knows it killed her.

Nobody will know her. I am making this story fiction to protect what is left of her life.

Luis Tarus, one of the founders of CPP/ NPA in our country famously said:

"I know now from experience, that the nationalism of the Communists is indeed opportunism, and that they use it for their own ends. Any nationalist who makes an ally of the Communist is going for a ride on a tiger.""